On Wednesday mornings, for the past 6 and 1/2 years, I have been going to a community center to teach English conversation.  This particular group started out as an 8-week course, but when the course was finished, they wanted to continue.  At that time, there were 23 people in the class.  Today, there are 22 students and  about half or so are original members.
Though there are a couple who are young (where "young" = less than 35 years old),
the majority of them are over the age of 45...the oldest is 72 (maybe, I might have to double-check about that, but 'over 70', at least!).

Here in Japan, we have a special holiday on November 3 called Bunka no hi or "National Culture Day, for the "purpose of promoting culture, the arts, and academic endeavour". Throughout the month, culture centers all over the country have festivals where most of the classes give performances......dance (jazz, ballroom, hula...), chorus groups, Tai Chi, various instruments--traditional (shamisen, for example) and not so traditional (guitar...), to name a few.  It's sort of a yearly recital for most the classes.

As far as I know, there is only one community center that has an English performance....by an adult group.
Yes, my friends.  That would be my class.
(Which goes by the name of SUNSHINE, by the way.)


Because it takes a lot of time and energy, we only do a performance every two years.
The previous performances have been traditional Japanese folk tales...ones that everyone sitting in the audience knew already, so the use of English wasn't that much of a problem.
Oh, don't get me wrong, they weren't in only English, but  kind of  bi-lingual productions.
This year....we did Snow White. 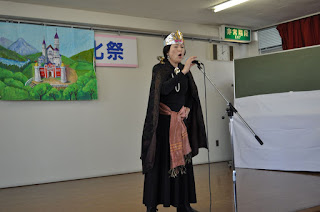 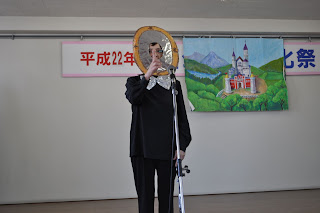 But...one day....the mirror answered that the fairest one of all was a girl with "lips like a rose, hair like an angel and skin as white as snow"
(seriously...that 'white as snow" line was pretty close...damn. I need a tan!!) 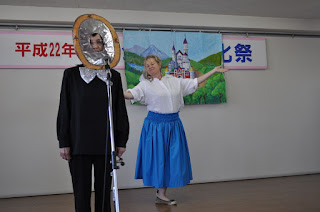 Snow White!!
The queen was not happy. 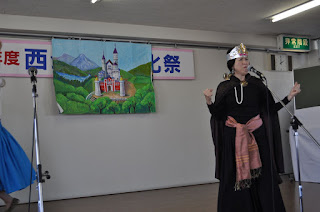 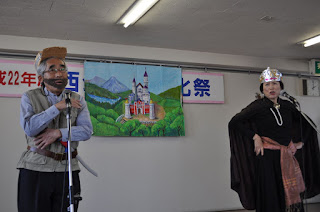 So, the guard took Snow White to the forest, but....with her long, American legs, she ran fast and he
couldn't catch up with her.  She was pretty tired so she sat down and took a nap. 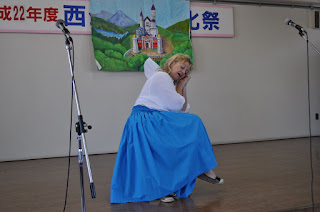 In the forest, there lived a group of little people.  They were returning home from work when they came upon Snow White, sleeping.
(Amazing that the music from the band didn't wake her...she must have
been really tired!!!) 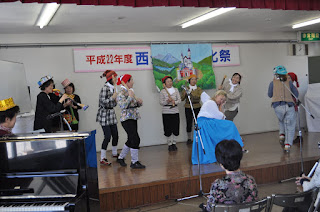 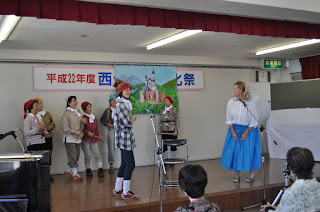 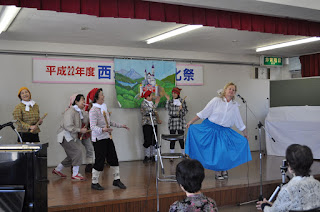 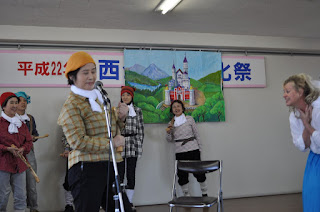 The little people decided that Snow White could stay with them.  They were all very happy.
One day, while they were off at work, an old woman
(and really kind of scary...a little kid in the audience cried! BooYah!!)
came to see Snow White and gave her an apple...a delicious apple and told her to eat it and make a wish.... 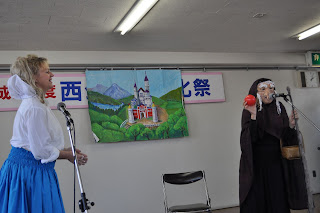 But Snow White, not listening to the narrator one bit, took a bite of the apple and then promptly did a very lovely ballet-esque spin and landed in the chair, asleep.
The witch was very happy and made an incredibly evil laugh that really was kind of scary!! 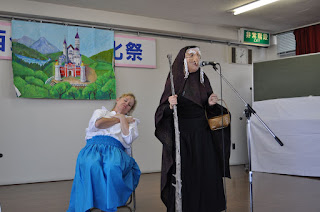 The little people came home from work and found Snow White....they were very upset.
(Snow White, on the other hand, had a hard time not smiling!!) 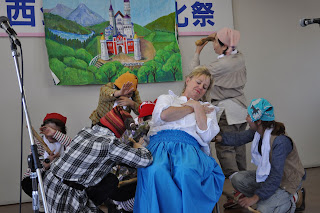 Then, a handsome prince (looking strangely much like the guard who earlier tried to kill Snow White)
appeared with his horse. 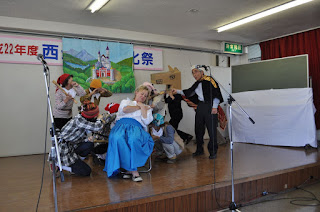 "Oh, Snow White...my princess...I love you."
The prince only pretended to kiss Snow White's hand (he was really shy!) but, she
woke up anyway. 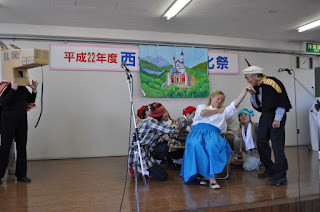 Then she thanked the prince and  they all lived happily ever after. 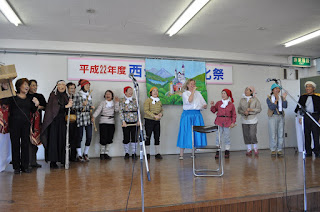 The cast...and the writer/director (far left, guy in the dark jacket). 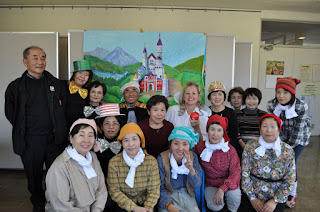 "Snow White" and "the Wicked Witch" 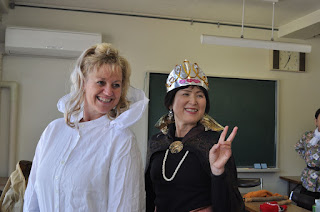 That's freakin' AWESOME!!!! How cool that they want to keep coming, and that they're willing to attempt such an "American" fairy tale. Looks like it was a smashing success!

Thanks for that great bit of Sunshine!

I am digging Snow White's high princess collar! And the mirror costume - so clever and funny!

And on a different tack, do your students think we Westerners are completely whack because one our most cherished children's stories involve a princess sleeping with seven dwarves?

Having the tall American play Snow White sure makes casting the dwarves easier!

My friend did the JETS program for two years in Hokkaido, Japan, and when I was stationed in Korea, I taught conversation English to DNA scientists (I doubt they would have gone for a play!) -- it's so cool to do things like this!

Wonderful! I love you and your class.