The other day, the boys and I were driving down the road, when we saw one of these... 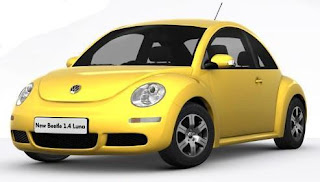 Both boys commented about it being "Mama's dream car" and then Koji thought that it would be really nice  if it were painted this color... 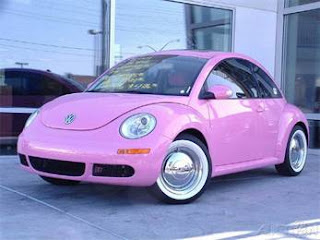 Then Issei mentioned that we would need to add some "extras" to make it perfect... 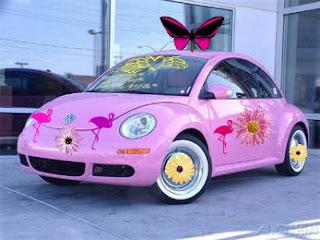 It was at this point that I realized....Oh Good Lord...MY dream car is
the same as Barbie's. 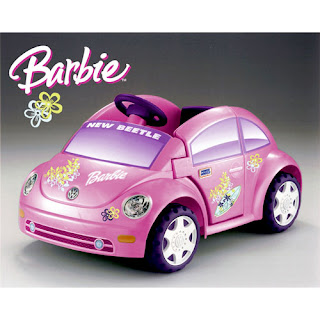 I think I have to might go to that really big toy store that rhymes with boys are plus
and see if this particular car comes in big-girl sizes, because really?
I like it....and I'd look really cute driving it,too
I couldn't get many groceries in there, but, I wouldn't care...
I think Ken might have a van...or something!!! 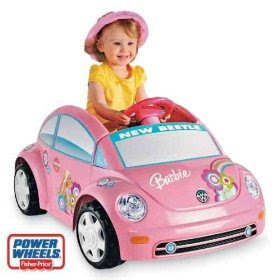 **thanks Google Images for the VW pictures!!
************
Have a great Friday everyone...and weekend, too as I may not see you again for awhile.
Tomorrow is going to be the day that I sort through stuff for a flea market on Sunday.
(Except, it's called a garage sale here....a HUGE garage sale with about 60 other people.)
I'm hoping that I sell most of it and don't have to cart home everything
I have boxed up will box up tomorrow.
The summer has officially started here...at least it has with the boys.  Tuesday was closing ceremony for both boys'schools and they are out until the first of September.  Both have a ton of homework (Issei more than Koji) but we are trying to find ways to still have fun
This weekend in Nagasaki is the Tall Ship festival down at the pier.  I'm not sure how many ships have arrived  but, it always draws an incredibly large crowd.  We are not ones for a crowd, but...we might venture somewhere on Sunday to find the perfect place to watch the fireworks.
Summer in Japan means fireworks....and the show this weekend promises 5,000 of them!!!  Personally, I can't wait...I do so love a good fireworks display!!!
We went to the beach on Monday...it WAS 'day of the sea', remember?!
Except...when we got to the beach, the lady at the parking area told us that, as long as we stayed in the roped off areas we'd be safe.  SAFE?? huh???
It seems that over the weekend, the fishermen in that area, netted about 10 hammerhead sharks very close to the beach.  Did that stop us from swimming? Did it stop the 100-or so people who were already there?
No. It did not.
If anything, it just added to the fun.
And yes, the theme song of the day was the music to JAWS.
We were safe....not venturing too terribly far from the shore and other than getting a little bit more than sunburned, we were okay and had a great time!!! 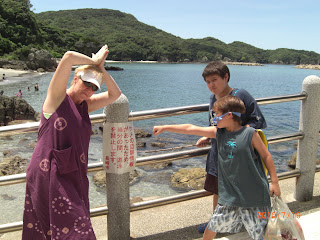 In front of the sign, warning people about the sharks...
Issei...looking slightly worried,
Koji...thinking he already was getting a tan (and
wearing his goggles over his mouth...he didn't want to lose them on the walk from
the car to the beach, I guess),
and Debbie?
Yes, Debbie was having a Jimmy Buffett Moment.

The boys....and how they spent a good part of the day.
(which would totally explain the sunburned shoulders...and yes, of course, we put on sunscreen...it was just a really super-hot sun!!) 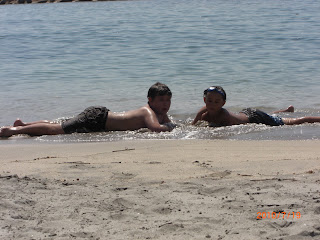 if it's 'flamingo friday', it must be saturday~~ 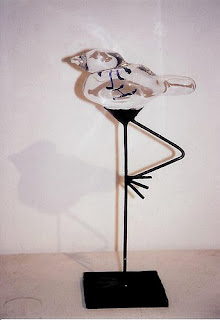 Bird is....
by Kanami Ogata
Ms. Ogata is a Japanese glass works artist and her stuff is incredible.  Mona and the girls over at GafferGlassUSA pointed me in her direction and I'm so glad they did.  Her website is in Japanese, but, you can see pictures of some of her work....great pieces.  I'd love to go to an exhibition!
I'm pretty sure that this particular piece was not meant to be a flamingo....that's okay...I still like it...a lot!!
**************
We are having a 3-day weekend as Monday is umi no hi  海の日, known as 'Ocean Day' or 'Sea Day' or 'Marine Day',  a day of gratitude for the blessings of the oceans.
Not sure what we will do...today was a busy day so we might join the gazillions of others and take a drive to  the beach.  The rainy season is unofficially over, so that means it's getting hotter (though still humid) but, not feeling as humid as it has (more on the rainy season possibly tomorrow!)...perfect weather for grabbing some picnic foods and heading to the beach for an afternoon of fun and sun! 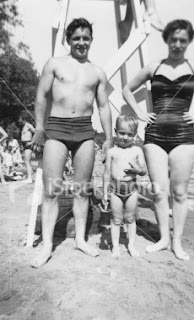 an umbrella that might possibly be worth investing in 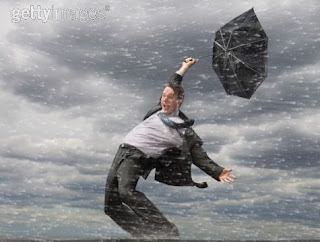 *again, with the Google Images...gracias!
So, the other day, when the K-Man was explaining to me about this new-fangled umbrella he saw on TV that was....totally, incredibly awesome, I have to admit, I was intrigued.
I watched the video.
Then, I watched another video.
And then, I was totally convinced---I want...nay, NEED... one of these umbrellas.
After today's torrential downpour (that, swear to God, lasted forever!) accompanied with typhoon-like winds---
I really neeeeeeeed one of these umbrellas.

*thanks Google, for the picture*
Yeah...it looks a little silly, but, watch this video.
If you happen to live in an area where it rains and blows and you spend a lot of time outside, you might
want one, too.

If you want more information, go check out the people at Senz and see what they have.
We have looked at a couple of places here in Nagasaki City and have not found anyone who is selling them.  The K-Man thought that the art museum (of all places!!) might have them for sale...if I have time on Friday, I might run by and see.  I did check over at the Japanese website of
"that place that sells books that is named after a huge river"
and they had some that were anywhere from 5,000 yen ($50) to 9,500 yen ($95).

After a day like we had today, I'm thinking that buying this umbrella would be money well spent.
And....if I'm forking out more than what I usually do, I might be a bit more careful about leaving it places.....

Have any of you seen this umbrella? or better yet...have any of you bought it?
I'd be very interested in reading hearing what anyone has to type say about it.

Posted by dkuroiwa at 1:14 AM 6 comments

a special flamingo (or two) for a very special girl....

A long time ago, when Debbie was still quite young, a very dear friend of hers had a little girl.  This little girl was beautiful and most precious to Debbie.
Debbie has always had a very special place in her heart for little girls.  It started when she was in high school, with her own little sisters, who were the first of the beautiful and most precious to her.
When this particular one was born, Debbie knew immediately that she was yet another little angel that was here for her to love and spoil. Wheezer (not her real name, mind you, but one that only Aunt Debbie was allowed to use) became the recipient of many special presents and hugs and smooches and was Debbie's favorite little person to take a walk with...when she was able to actually walk, that is.
(One of Debbie's most favorite of memories is walking down Main Street with Wheezer when she was about 3...and Wheezer was wearing a little serape she had brought back for her from Mexico over her big, blue winter coat.  She looked absolutely adorable.)
The years went by, as they tend to do...Wheezer was joined by another sweet little girl...her little sister,
Roo Bear was born and Debbie had two little girls to love and spoil when she was home for a visit.
This is a picture of Wheezer and Roo Bear taken 14 years ago at Debbie and the K-Man's wedding. 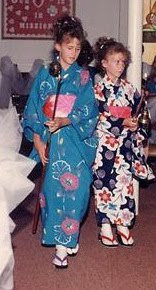 Tonight, in Debbie's hometown, Wheezer will be getting married to a very wonderful young man.  Roo Bear will standing up with Wheezer.  Their mom, still a very dear friend and her husband (a goofball in his own right, yet, he too is a dear friend) along with other family members, Debbie's own mom and many, many friends will be there to witness this beautiful moment.
Debbie has tears in her eyes as she types this because she wishes that she could also be there.
But, as in her little sisters' weddings, some things are just not that easy to do.
So...in honor of Wheezer and her groom, Debbie dedicates this week's Flamingo Friday to them. 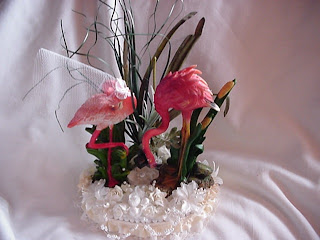 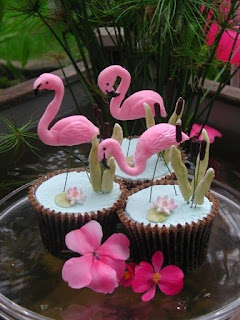 I love you, Wheezer.
{{hugs}} and love to you as you start a new and wonderful chapter in the book that is your life.

For a few years, we were a family of three...
Issei was the lone Kuroiwa son.

Issei said, one time that "Koji's whole body laughs."
He was right.

The Kuroiwa Family had become
a family of 4.
Happy Birthday, little man. 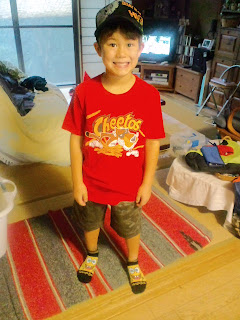 (Koji, this morning...in his b-day bounty...from his head...to his SpongeBob covered feet.) 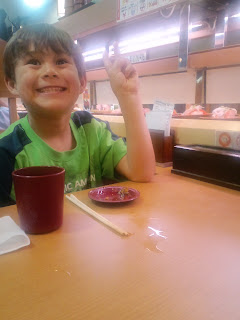 This will always be my favorite
picture of Koji.
Always.