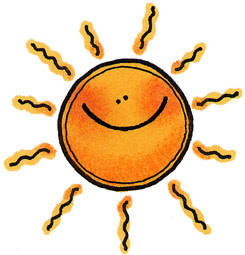 Typhoon #11 update....So, when I went to bed last night, the typhoon looked to be headed in our direction...if not directly over, then she was to be coming pretty damn close...close enough to give us some pretty good wind and rain. Now....this morning, it seems that she has decided to head on west, into the China Sea....away from us. *whew*
Now, as much as I love a good storm I am relieved as you just never can tell what kind of power will come with a typhoon....that kind of wondering I can do without!!
So....the good news is that there is a nice breeze blowing today which means all the laundry I hang out today will actually dry today!!! (and no, most people don't use dryers here....too small, takes too long and cost waaaay too much in electricity!!!) It is almost 10:30 and I have already hung out 4 loads, with only 2 more to go and then I can move on to something else....the windows are all open and a lovely breeze is doing a great job of cleaning out the air in the house!!! There is a good chance it will rain a bit tomorrow, so the more I get done today, the better!!! It's also cool enough that I might just get some candles made today...gosh, the list of "things I could do today" is so long!!!
I better get moving on doing something constructive and not spend the whole day sitting here at the computer!!!
You all have a great day and a wonderful weekend!!
Much love,
d.

Something that just kind of made me chuckle....

Okay...so I have been trying for 3 days to post a video from YouTube to share with you, but for some reason, I cannot!! And this is really frustrating because I have been posting videos to the blog I have for my students (using the same Google information!!) and have done so with no problems!!! AAAARRRRGGGHHHHH!!!

ANYWAY.....what I wanted to post was the information about a new movie that, really, is one of those "things that make you go "hmmmmmm""!! I must admit..I am intrigued...... 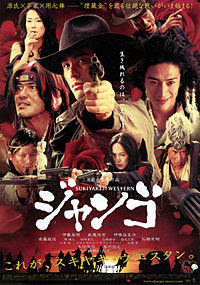 This is a new movie opening up in Japan on September 15 (soon!!) and honestly, I really want to see it!! First of all, it is a movie by director Takahashi Miike, who, I once read in an interview, is a Quentin Tarentino wannabe!! And he proves it, I'm thinking in his new movie "Sukiyaki Western: Django".
So here's the drift: If you like "spaghetti westerns" AND Tarentino movies, me thinks you're gonna love this!! The previews are great!! There is alot of cool sound effects, grungy guys staring at each other...just think Eastwood, Van Cleef, Terrance Hill (a Hutches-family favorite!) and any movie they were ever in that was filmed in Italy!!!
The film is actually a remake of Sergio Corbucci's Django.
Quentin Tarantino has a part in the movie.
Set during The Genpei Wars at the end of the 1100s, the Minamoto and Taira gangs face off in a town named Yuta, while a deadly gunman (Ito Hideaki) comes to the aid of the townsfolk
And now...the best part about this movie is......ALL THE ACTORS (except Tarentino!) ARE JAPANESE AAAAAANNNNNDDD IT IS IN ENGLISH!!!
Yes...all the actors and actresses are speaking English....
Now, I don't know how many of you have spent much time around Japanese people, but...with the exception of a few (like my man Ken!!) very few movie stars can make themselves understood in the English language.
I have watched the teaser a few times and, honestly, there are a few places that I have no idea what is being said!! I told my friend Karen that we will probably need to take beer with us to the movie...that might help!!
Of course, I told my students that they will probably be able to understand the dialogue as it will be in "Japanese English" and that is what many of them speak!!! :-D
Okay....so here is the YouTube link http://www.youtube.com/watch?v=S61ySyaJQSE
Go and check it out...then tell me what you think!!!
(and yes, I am smiling to myself....hoping that it's here next Wednesday when I have an afternoon free AND it's "Ladies Day" at the theater and I can get in for a bit cheaper!!)
I hope you all are having a good week...it's getting cooler here now and as I have been teaching my students..."Fall is in the air."!!!
much love...
d.

So, it is now September.....crap....I still have things from MAY that didn't get done. Ah, and so it continues. Let's see....the past couple of days I have been thinking about what to put in this next post and decided that I would pay tribute to some of my favorite things, favorite people and just ramble about this and that....('cause you know, I do that so well!!)!! So, here goes...this blog is brought to you today by:

*The letter "k"....for Kahlua. I was talking to a class yesterday and we started on the topic of drinks and such and it reminded me that I need to make some Kahlua. I did that a few years ago and gave small bottles as presents to various people....hmmmm....me thinks it's time to do it again....

*The end of the summer holiday. Gosh...talk about your "mixed feelings"!! Though sad to see the vacation end....am actually glad to get back into a regular-type of schedule. I have to admit that I missed my students....as most of you know, I teach oldER learners of English. The average age of my students is about 58 (give or take)....the oldest is 84!!! They tell me that I give them energy, well....that road goes both ways...all my classes are so much fun and I find myself smiling and laughing....it's great!!! So....anyway...back to the end of the vacation...along with the end of the holiday also came......

*The end of "summer homework"!!! Kids here, during the summer holiday, are loaded down with various packs of pages to do, notebooks to write in, and projects to do. As Issei takes after me in the area of "procrastination" ("No, really....I'll do it later".), getting things done came down to the proverbial wire. Thank goodness it rained most of Sunday which meant that he couldn't go outside to play and could stay inside and get his last project done!!! As my friend, Jan and I were talking about, no, it really isn't that much to do....all the kids have to do is work on it a little every day and it would be not problem. BUT....as most parents will tell you, their kids are trying to get it all done in the last couple of days. Issei, thankfully, got it all done (finally!!) and did a couple of really good projects...he made a calendar using rocks (will post photo later!) and put together a book of the two museums we visited in Denver. PLUS......he had to write a speech for the opening ceremony about "Memories of my summer vacation".....he did a great job!!! He and 4 other students read their papers in front of the whole school yesterday in the gym.....I was very proud of him!!!

*The Susan G. Komen Foundation's Race for the Cure.

On October 7, Denver will be having it's annual Race for the Cure and I encourage everyone, if you can, to join, or at least go to my friend, Lila's personal page and pledge some money to help her. Her goal this year is to raise $500 and she is almost there. Lila is a SURVIVOR and is such an incredibly strong woman....I am so proud of her...I wish I could be there to walk with her and her "team"...but will do what I can from here! Go to:
http://www.komendenver.org/site/TR?pg=personal&fr_id=1050&px=1275804 and give a little!! It's for a cause that could someday save you or someone you love!!! 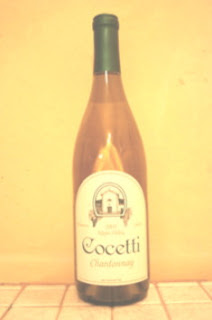 *Cocetti Wines. As a close, personal friend of the Cocetti Family I am proud to include them on my blog. I have known the Cocetti's since 1984....their daughter Dena is one of my closest friends and they have pretty much adopted me into their family. I was once christened "Debbie Willsoni" so I could, at least, sound like I was Italian!!
You can now go on-line and order their incredibly delicious wines from their new web-site....though it can't be shipped to all states, there are many places in Colorado you can go and purchase it...and I suggest you do just that....you won't regret it. I can honestly say that I have tried most of their wines (some from the basement out of the barrel!!) and given the choice, I'd stay with the Cocettis!! Go to their site at http://www.cocettiwines.com/ and check them out!!!

*FOX TV. Since we upgraded our cable a few months ago, I have turned into a FOX addict. House, My Name Is Earl (where, I swear to God, I can recognize many people from home on that show....Love It!!!), Queer Eye for the Straight Guy.....the list goes on and on!!! Since cable has gotten so much better over here, there hasn't been the NEED for videos from Mom.....which I am so sure she appreciates immensely!!! 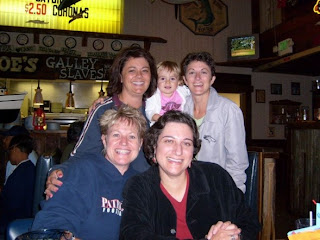 *And, last but not least....good friends. This picture was taken our last night in Denver at the traditional "Eat at Joe's before we go" dinner....here we have Dena (back left) from the beforementioned Cocetti family, in the middle is Katie-Bug, gorgeous daughter of my friend Caroline (on the right), then Lila (Bless you luv for driving through storms and such....it would not have been the same without you!!) and then me. Also joining us that evening were my Uncle Bob, Aunt Marcia, my cousins Robert and Jeffrey and Jeff's fiance Robyn....Issei and Koji were having such a great time at Joe's, I'm not sure if they sat down long enough to actually get their pictures taken!!!
This evening is always such a fun time....a great end to a wonderful vacation!! We have been doing this for quite a few years now.....a lot of the same people join and then sometimes new ones join....but always an evening of fun, laughter and lots and lots of hugs!!!
So....to all my family and friends....those I saw and to those it didn't work out to get together (Cheryl, Kim, Anna/Joe, Lauren/Eduardo, Jay, Terri, Ms. Ginger.....) I love you all....you are always in my thoughts!!
And now.....I think I am done.....*whew*.
Have a great day!!

Posted by dkuroiwa at 9:45 AM 2 comments