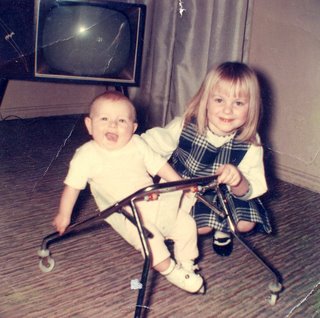 Happy Birthday, Doug!!
My brother is going to be celebrating his 40th birthday on Halloween, so I thought I would post this picture (one of my favorites!!) in his honor!! On the original picture on the back, Mom has written "4/67"...which means that I was 5 and Doug was 6 months old....which is almost exactly like the previous picture of Issei and Koji (4 1/2 and 3 months).
Koji actually saw the picture and said "Das Koji."....no, says I...that's "uncle Doug"...no...."Das Koji"....and the debate continued. But...one can see where the mistake could be made...round head, very little hair, sparkly eyes...."Das Koji"!! *smile*
Happy Birthday, Doug...I hope you have a great day!! Love ya, man! :-D

**Just one small comment about the "walker" that was used in 1967...obviously, the rules for "safety" were a bit, shall we say....lax!! That thing looks like an accident just waiting to happen...just goes to show that there truly might be something to that "guardian angel" idea!! 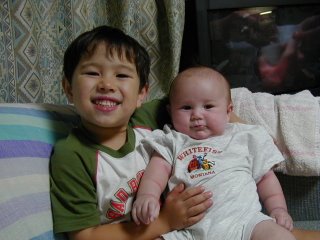 I was going through some old photo discs...taking a walk down the ole' proverbial "lane"...and found this picture...seems hard to believe that Koji was ever that little...It's funny, how, that in this picture, the four-year-gap between them, seems really big...and yet, now...they seem much closer in age.... It's also funny that, nowadays, if they are ever in this same kind of pose...Issei probably has Koji in some sort of headlock...and we wouldn't be able to get this still enough to take a picture!!

Posted by dkuroiwa at 1:32 AM 1 comments