it doesn't happen very often, but yeah.....the words in my heart, just wouldn't come out....

(i have worked on this post for over a week and i know that it might seem a bit 'not put together right', but...hang in there, please....and God bless if you make it to the end....for my thoughts were incredibly jumbled!)

i can usually say what's on my mind....on pretty much any topic with almost anyone.
but, when it comes to matters of the heart, i'm a little wimpy.
no. that's a lie.
i'm a lot wimpy.
and i can tear up easier than most.
that said....
remember my holiday party in december i had with my students?
well....there was a point in the evening that, had i not known anyone in that room,
i might have been a little embarrassed...
but...since i did know all 68 people in that room, they were kind enough to pat my hand...my shoulder...and with gentle smiles....
go on.
in november, one of my students who had been very ill for about a year, passed away.
as she was a good friend to many,
it has been hard  for us, but..we comfort and help each other through the healing process.

she really was an incredible woman.
i miss her so much sometimes....
the first year i planned this party, my student (M-san, from here on), was very adamant about doing something, so she volunteered to recite a poem, in English, that really meant a lot to her.  it was one that had been printed in Readers' Digest and it was about not growing old, but living, instead.
everyone in that room was captivated by her.
she was positively shining.


her passion for learning was epic.
M-san was a bit of a perfectionist, but....it worked for her.
she studied english....she sang....she played the piano...she was involved in various activities in nagasaki....
and she gave 100% in everything she did.
at the party in 2010, she volunteered to give a speech to everyone.  she ended up giving a mini-lecture about Ernest Hemingway.....and it was good.  oh, sure, not all could understand what she was talking about, but....everyone in that room was so impressed with her.
THAT they will remember forever.
last year, the students who came to the party (and even some who could not) each donated 1,000 yen  (about $13) and we took the money and bought Christmas presents for 38 kids, aged 5 months-19 years old, who were living in one of the orphanages here in the city.
we picked out and wrapped presents for each child.
the kuroiwa family decided that doing that felt really good.


this year....i thought that if we did the same thing, it would be a little difficult...i didn't want to mistakenly buy the same presents as last year so....i called the head sister at the orphanage and asked what she thought.
she and the rest of the staff were thinking of purchasing a large board for the entrance way of the orphanage.  it would serve as a place for messages...daily reminders...notices...verses....things of that nature.
the money we gave would help to buy that.,
i felt that, even though we were helping the orphanage again, it would  be nice to share the love even more and i was looking for another group to give a donation.
after the tohoku earthquake and tsunami, feeling such a feeling of helplessness, i asked my students what they thought about donating things to vicitms in that area.
my students were awesome.
almost everyday, for 2 weeks, students brought things.
i went so many times to the drop-off place that the city had that the main workers there would see me pull up and give me a "hey, kuroiwa! .you're back!!".
that? felt awesome.

one day, about a month before the party, i had a bit of an epiphany.
a student had brought me a Christmas card that she had bought on a trip to new zealand.  the card was beautiful and i turned it over to see which company had made it.....

and....like something that is hard to explain....i suddenly remembered, about 4 years ago, M-san had gone to an information meeting by one of the head  people from tokyo....she showed us pamphlets...and told us all about it.....she had bought books...t-shirts....she was oh so excited about the MAW Foundation.
(i believe that, as M-san had been sick many years before and recovered, she knew what it felt like to possibly face death.  she knew how hard it was.  but, for a child to do this....it must be most terrible. that's just the kind of person she was.)


so....that night...i contacted the Make-A-Wish foundation in tokyo...the woman who got my e-mail message just so happened to be the woman who had come to nagasaki...and she remember M-san.


sometimes....the stars and moons and planets really do line up...and all is right.
not only did we donate money and donuts to the orphanage ("yes, i'd like to buy 80 donuts, please."....that was funny!!  i'm sure the ladies at Mr. Donuts are still wondering what i was doing!!), but we also made a donation to the Make-A-Wish Japan Foundation in the memory of our friend, M-san.
by the way....to Make-A-Wish, we donated 50,000 yen (about $640)
and to the orphanage, 45,000 yen (about $580) and enough donuts for all the kids (some had 2!!) and staff.
so, there i was at the party...at the point of the evening where it was my turn to say a few words to everyone.
twelve tables, full of people i positively adore, all looking up at me.

i wanted to tell them how incredibly proud i was to be their teacher....
that i appreciated, more than they would ever know, the fact that they keep coming to my classes...and they encourage friends to come, too.
i wanted to let them know that i looked upon them, not only as students, but, for many....as friends...even family, for some.
i wanted to say that their willingness to help other.....to sometimes do slightly crazy things in class (with smiles on their faces!!) was something that i admired in all of them.
but mostly, i wanted to say that i was pretty sure that M-san was looking down upon us and smiling....that i could feel her there with us.
but....as the words bubbled up in my heart, they got stuck in my throat and i could only croak out a much shortened version of what i really wanted to say.

as i walked around the room, stopping by each table (as i did all night!), visiting everyone, i got  special smiles, a wink or two, a few pats on the arm, my hand got held a few times, someone rubbed my back, i even got hugs.
very few words, though....but i didn't need them.
those actions...really did speak quite loudly.

the one where debbie just stopped by to make sure things were going okay.... 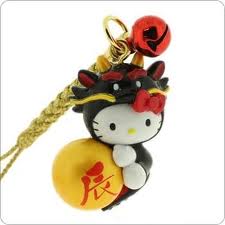 and since we are almost at the end of well into the month of january, it can be safe to say that
the dragon is treating us pretty good....so far.
the purchase of a not really new but used as a test drive car right before the holidays has already proven to be a really good financial decision for us for the new year.
we bought a kei car....or K car as the Bare Naked Ladies sing about and though it is small and light (K comes from the japanese word karuii, which means "light")...it is still pretty roomy, especially in the back seat where we have 2 sets of very quickly growing legs sitting back there.
plus, i can already see a big difference in what i spend on gas every week.
that is good.
we went for a nissan moco...
she's very cute.... 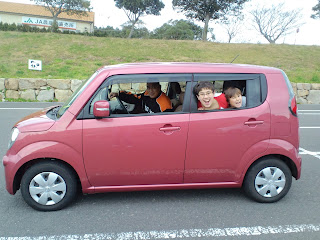 and no, she's not pink....she's actually more of a coral color.
we love her.
and by the way, she doesn't have a name yet...we keep tossing around a couple, but nothing seems to really work....we're not going to rush the naming....i would really hate to choose the wrong one.
we'll keep you posted.

the boys are in the process of winding down their school year....our year goes from april to march.
this week, issei, as a second year student in junior high (in the states, that would be 8th grade) is doing his
shokuba taiken gakushu ("experience the working world") project.

for 3 days, (and this is happening all over the city....some schools do it in the second term, others in the 3rd term) junior high school kids are out in droves in various places around town "working".
issei and one of his friends are at the supermarket not far from our house.
he seems more excited about getting to sleep in a bit and not having to wake up at 6:00 for three days than actually doing the project!!  yes, he'll fit right into the working world!!!

as he was walking out the door this morning (in the light snow we were having....it was so pretty!!), he turned quickly and said,
"don't come and take pictures.....no blogging about this."
"whaaaaaa? do you think i would do that?"
"just. don't."
spoilsport.

okay....even as i type, i have another blog post brewing in my head and it's trying to muscle in on what i've got going here....i need to see about doing something with that .
i had possibly and unofficially made tentative plans to put up more stuff this year....gosh! i looks like january might actually have 2 posts!
**gasp**
i know....it's kind of exciting, isn't it?
(^-^)/*
(hahahaha)

happy new year from us, here at kamp kuroiwa....
may your 'year of the dragon' be filled with wonderment and all sorts of fabulous stuff!!! 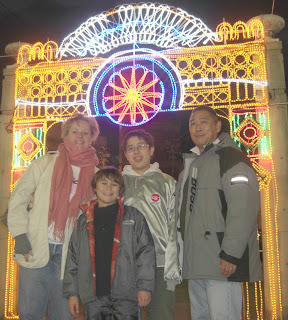