Here it is a sunny Sunday afternoon and we are all thankful that typhoon #4, or Man-Yi, as she was named...didn't really hit Western Japan.
We were extremely lucky because the eastern part of our island just got hammered!!! After having it rain for basically the last 2 weeks plus the typhoon, things have gotten pretty dangerous what with landslides and such. Yesterday was actually calm with only some wind and strangely enough, no rain...at all!! I kept thinking that the skies would just open up, but that never happened!!!
So...today....yes, we are doing "power laundry"!!! I have just put in the last bit of anything that needed to be washed and I won't be packing dirty clothes to come to the States!!! *whew*
The boys are outside playing with friends that they won't see for a month..."power playing" perhaps?!?! :-D We are having dinner with some friends this evening and tomorrow will be spent getting suitcases ready!!!
This is a short post, but I just wanted to let you know that we were okay!!!
Ciao babies!!
d.

Posted by dkuroiwa at 3:08 PM 7 comments

So...here it is...Friday night (Friday, the 13th, mind you!!)...and we are patiently waiting for Typhoon #4 to come to our area. Our "typhoon season" has started really early, this year. Usually, they don't hit until more into the month of July...of course, we do have early ones sometimes, but our "rainy season" isn't over yet, which makes it really bad for some areas that have already gotten tons of rain!! 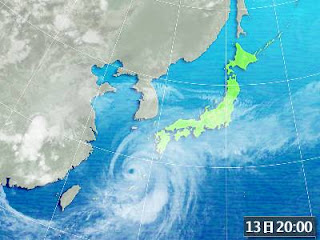 On this map, you can see where it was at 8:00 this evening. Okinawa felt the effects for about 24 hours (said the news a while ago!)....lots of rain and wind. One driving range at a golf course pretty much just blew away....and yes, it is headed towards us!! (the typhoon, NOT the driving range!!!)
Right now, we just have some wind and it has started raining, but just a little bit.
It won't come directly over us, but the whole typhoon is expected to almost completely cover the island of Kyushu throughout the day tomorrow. 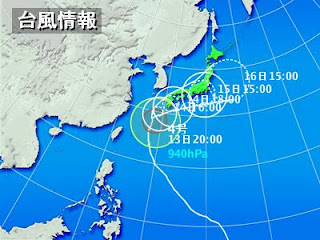 On this map, you can see the red outline just south of the island of Kyushu (that's us!!). Right now, it looks as if tomorrow around noon or so, it will be the closest.
I guess, my class tomorrow morning will probably be cancelled....I better call some students and find out!! :-D

Tomorrow morning will be spent bringing in the potted plants...the lawn chairs....anchoring down anything that might blow away!
We have metal shutters that we close on all our sliding doors....and we have a lot of those...but, we try to not do that until the very last as it makes it completely dark in the house!! Issei just said that we will be okay as long as he and Koji can watch the DVD's that we rented earlier....you should have seen the rush at the video store!!! (The grocery store was just as busy!!) The funny thing is....usually, during a really bad typhoon....the electricity will go off...at least for a little bit...sometimes longer!!!
The candles are ready and the flashlights have new batteries....we have food....and we are ready!!!
As Bette Davis said in one of her movies...."It's going to be a bumpy night!"

(** But, since I really like storms, it will also be kind of exciting!! I just hope and pray that the typhoon goes more in an eastern direction and the main part misses us!!!)

Posted by dkuroiwa at 9:24 PM 2 comments

...HAPPY BIRTHDAY, KOJI!!!
Hard to believe that he is 5 years old already...my, my, my how the time does fly by!!
So, to celebrate this special day, we went out for sushi and Shrek!! This was Koji's first time at going to an actual movie theater, and he did pretty good. Thank goodness the movie wasn't really very long...he started to get a bit "wiggly" towards the end!!!
(The movie, by the way, was...just okay. We are big fans of the first two movies and this one didn't really have the same "punch"!! We did laugh though...Kiyoshi got a kick out of some of the music numbers!!!) 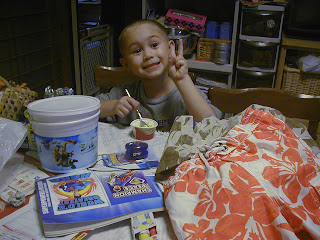 Oh...if you are wondering about the haircut....no, Koji has not decided to look like his brother....Koji decided, sometime last night, that he needed a haircut....and he did it himself!!!
This morning, when he came into the kitchen, I was all ready for the morning birthday song, when all I got out was "Happy Birrrrrrraaaaaaaaaahhhhhhhhh What did you do to your hair?!?!?!"
Haven't really gotten a good explanation yet....fixed what I could before we went to the daycare (swear to you there are places that are completely bald!!). Before we met Kiyoshi and Issei for dinner, I ran by a salon and begged for their help. The guy there did a pretty good job!! Ah...the joys a raising little boys!!! :-D 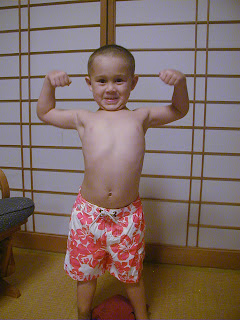 Koji and his new swimming suit he got and in his "muscle man" pose!!

This next picture is probably one of my most favorite ones of Koji....it was taken just a few hours after he was born!

Even then, you can kind of tell there was an element of "fun" in his personality, can't you!! 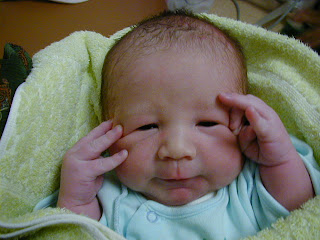 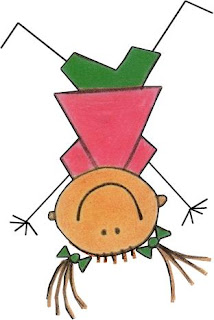 Okay...so....I'm trying to be calm and levelheaded about this...but....am finding it hard at times....My friend at the Kinki Travel Company (!!!) came through and now I have, not in my hand, but in a safe place, our tickets for the trip home!!!! YEAHHHHHH!!!!
Ayako (my Kinki agent!!) got us some great connections at a price that didn't make me feel like I needed to cut off a body part to help pay!! They weren't cheap, by any stretch of the imagination, but....less than what I was expecting. This year, the "fuel charge" is jacking up the price for each ticket about $350!!! *gag*
Anyway....not going to think about that....just going to let the friendly people of United take care of me and my boys and pray we get to you safely and without any major mishap. Am thinking I will drop by one of the big temples here and see if they have an "omamori" (good luck charm) for traveling!!!

Issei, Koji and I will be arriving in Denver on July 18...we will camp out at Hotel Cocetti for a night or two, then head on down south. We have a family reunion that weekend and my youngest brother and his family will be there from South Carolina. Our friend Lila is going to try to journey down around the 24th or so for a day or two (we do love our Lila....she and Kim were two people that we really hated to see leave Nagasaki....sniff sniff!!)
Anyway....we will be back to Denver sometime around the 13th or so....as we leave to come back (wow!! that went really fast, didn't it?!??!) on the 16th.

Posted by dkuroiwa at 1:14 AM 1 comments 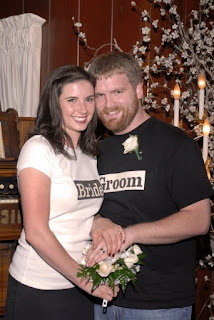 **First of all....I want to say "Welcome to the family!!" to the newest member of our clan.....Joe!! My youngest sister, Anna and Joe got married a few weeks ago in Las Vegas!!! They moved out there in March and though they were planning on a wedding in August (or September, sorry, can't remember!!) they decided to just go ahead and do it!!! I think that Anna offered us 2 different versions of what happened, one being the logical one (having to do with school, insurance and what-not) and the other being the romantic one (anniversary of first date, that sort of thing!!)
I think that it is great and, to be honest, had really wanted to do just that....but I would have had an Elvis or two to help out!!! 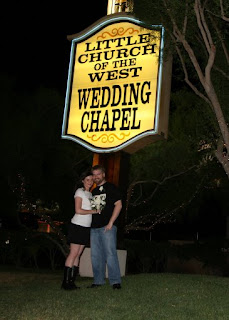 Here is where the wedding took place...I think that this is in the Guinness Book of Records or something...for what? I have no idea...maybe "most weddings" or something like that! :-D

We are so very happy for you two....I hope that we can meet Joe someday....most everyone got to meet him at Sara's wedding in December.
We wish you both the best of everything!!!
Much love...
*big hug* 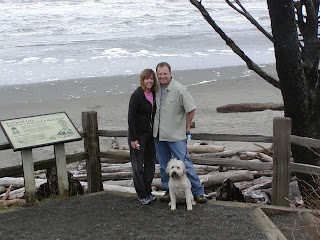 Congratulations #2 goes to our very good friend Kim in Seattle and Brian!!
They were also married in Vegas...on Wednesday!! (what is it about Las Vegas these days?!?!)

They planned to be married at the fountains at the Bellaggio Hotel....a few close friends and family were to be there. (I was there in spirit as if there had been any way to be there, I would have!!!)

Kim and I met here in Nagasaki...we knew each other for a couple of years, then ended up working together for about 3 years. I have been lucky enough to have met some incredibly wonderful people here that ended up being some of my "bestest" friends, and Kim is definitely one of those people. I've never met Brian, but...if Kim loves him, then that's good enough for me!!! Welcome to "the family"!!! (I hope I can meet him someday, too!!)
Congratulations again....I'm looking forward to the pictures and hearing all about it!!! (especially in "real time", when I am only one hour ahead of you, instead of 15!!)

So....one of my favorite Far Side cartoons (oF which, there are MANY!!) is the one where there are two spiders at the bottom of a slide in the park. They have made a web that goes across the end of the slide and one spider says to the other, "If we pull this off, we'll eat like kings."
In our garden, living in the trees, we have 2 of the hugest spiders I have ever seen....though they make absolutely beautiful webs that sometimes go from tree to tree, they are still quite scary looking!
Anyway...today, I came home after my morning class to get some laundry done...there was a break in the rain and there was actually some sunshine for a bit....sticky sunshine, but sunshine nonetheless!! (FYI...very few people here use driers....most laundry is hung outside...or on rainy days, hung all over the house!!!)
Ahem....back to my point....so, I haven't been able to hang out laundry for a few days and on the first load to hang up...I'm walking around the corner of the house and all of a sudden it was like..."what the hell?!?!?!" I walked into one of those huge spider webs!!! They had made one that went from the house over to loquat tree (about 4 feet!!). I was trapped!!! :-D
I *flashed* on the cartoon and thought to myself...."Wow!! That Gary Larson really knew what he was writing about!!"
I was laughing (while getting myself untangled from the web!!) thinking about that....the spiders were probably very disappointed when I got "out"!! (and my neighbors probably think I'm a nutter....carrying on like I was....I might have actually said something TO the spiders......!!)
Oh well....just another goofy day here in Japan!!