a short story about a tree....

When the K-man and I first met, a very long time ago....like 16 years a long time ago....I never thought that I would be where I am today.  Oh, sure, when we first met, it was fun and well, to be honest.....he had a car and I was pretty damn tired of taking the bus/streetcar/ankle express everywhere so the fact that I had this cute guy who wanted to take me places was just an extra bonus in my life.  Never mind the fact that he didn't speak English and my Japanese was oh so very laughable.  As strange as it was, it was a relationship that worked for us.

We met at the end of April...dated pretty steadily, especially after the summer holiday.   I took a trip home and realized that there really wasn't much waiting for me there, in terms of a relationship and decided that the K-man was someone I should "keep".

That first Christmas we celebrated was a fun one.  The Japanese do the holiday a bit differently and if you're not actually a Christian (which there are quite a few here in Nagasaki) or you don't have a girlfriend/boyfriend/spouse/kids, then the day could come and go without much fanfare at all.  It's just a regular day here, folks. 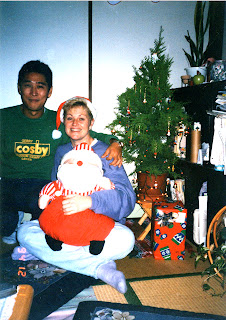 Yeah...I know...Jeez Louise but we both look young!! Man!
Anyway.....see the tree?  That was/is the closest you can find when it comes to  a real tree for the holiday.  You can pick them up at any DIY or garden shop.  I think I got that for about $10....maybe.  Many of my students have told me that they have the same kind of tree in their gardens.

When the holiday was over and in the cleaning up process, for some reason, I just tossed the tree.  It was cute, but, it had served it's purpose.  It was almost dead anyway and strangely enough, though I will usually hang on to stuff until the last possible moment, this tree? Meh....I let it go.

Fast forward a few years.....the K-man and I,  along with Issei (who was about 3 at the time) were a family.  As Christmas rolled around,  I began taking out the many boxes of decorations and what-not that I have collected over the years and the K-man brings into the garden---a tree....a small tree that looks vaguely familiar.  It was a little taller by then, but...yes.  It was the tree from that first Christmas...he had kept it at his mother's house.

He had seen it in the trash (oh so many years before) and being the man with the proverbial 'green thumb', he felt it was his duty to say the tree from its demise.  So, he took it out of the trash and transported it to his house, put it in a pot and nursed it back to health.
It was in our garden for the 5 years we were there at that house.

Right after Koji was born, we moved to our current house.  The garden is huge (a bit too huge for us, but...we deal).  The K-man decided that it was time to plant The Tree.  He picked a place that he thought would be perfect.  It was right outside our living room window and could be seen very easily....you know, if one was wanting to look upon its beauty.

The place where he planted it, in the long run, was not so good.  He put it between two other trees and for a couple of years, yes, it was quite lovely.  But then, it began to grow....up....and up....and up...and even more so....up.  At the top, the tree was very pretty, but, it was so far up there it was kind of hard to tell.  (The neighbors who are up higher than us tell us it was lovely.) 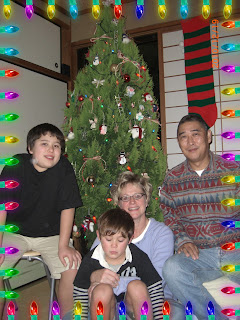 *Koji was NOT happy about getting his picture taken....
this was the best one of the group.
~~sigh~~)
Happy Holidays, Everyone!!
Mele Malikimaka....
from our house
to yours!!

those three guys sure look older than the last time i saw them.

Oh, yay! After all that time. I'm sure you are enjoying it so much! Enjoy.

oh my hell, that is the sweetest thing i've ever read!

merry christmas to you all!

What a lovely story! I don't see much difference from the couple in the first picture to the couple now. What a nice looking, happy family! Merry Christmas!

awww, what a sweet story!

I have a friend who always gets GREAT pics of her son. I finally asked her how she did it--she pays him if the photo is good!

What a great story and how it gave me goose bumps....Merry Christmas from all of us to all of you.

This is now officially added to my list of favorite Christmas stories.

what a terrific story! I'm one of those people who pull plants out of the trash too.....now I feel better knowing I'm not the only one!

Aw, I love this story. And I hate having my picture taken, too, so I can sympathize with the kidlet.

Merry Christmas to you and your family.

And it came full circle.... Wonderful! (And what a wonderful hsuband.) Merry Christmas!! Hope it's a great one.

What a wonderful and romantic Christmas story! You deserve that big, lush tree, Debbie. Your boys must be the talk of the block :)