the blogpost that debbie "seinfelded"...you know, where she wrote about nothing too terribly important

Tomorrow, I'm planning on making a carrot cake for my good friend's daughter.  Her 18th birthday was yesterday and, well.....she likes my carrot cake (with awesome cream cheese frosting...of course!) so I thought it would be a good present to give.
I've been thinking about possibly doing cupcakes.
If I lived in the States, I'd have access to some really cool cake decorating supply shops and
I would make these for her....in a heartbeat. 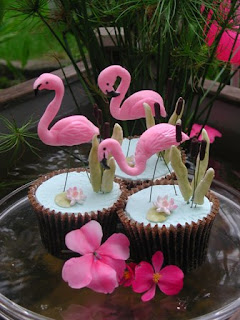 But....I don't live near a really cool cake decorating supply shop so.....I'm going to
have to get really creative...or, I'll just give her a regular carrot cake (with awesome cream cheese frosting, of course!) and show her the picture of what I wanted to do!!
Yeah....that's probably what I'll do.
*****************
The other night, before bath, Koji asked me for a drinking straw.
A little while later, Issei comes into the kitchen, chuckling to himself, and said,
"You need to go and see what Koji is doing."
Preparing myself for Lord only knows what, I went into the bathroom.
Koji has developed a desire for diving, it seems.
Hence.....the straw. 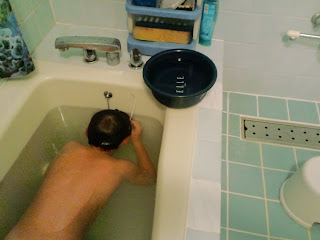 ************
An ice cream bar to beat the crap out of other ice cream bars.
New York Cheesecake.
Holy mother of all that is right with the world, THIS
is positively 'pornography for your mouth'. 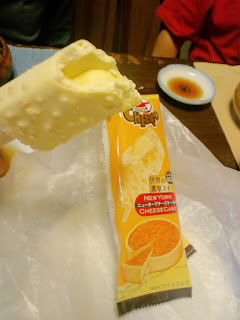 Outside....hard vanilla shell with bits of graham crackers.
Inside...yummilicious cheesecake ice cream....pretty gosh darn close to just 'frozen cream cheese'.
Oh, yeah.
Goooooood stuff.
**********************
Last Sunday was the annual elementary school festival.
In the morning, everyone was in the gym, watching each of the classes' performances.  There was singing, dancing, short skits....it was a pretty good day.
During the intermission, Koji and one of his good friends came over to talk to me and, well...
I had to take a picture of the t-shirt the friend was wearing. 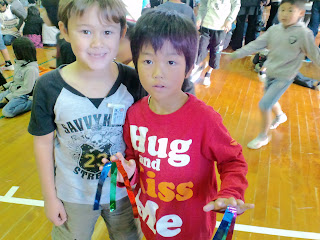 And yes.....after I took the picture, I did hug and kiss him (small peck on his head!!).
His mom was across the way and was laughing...she laughed even harder when I
explained what the t-shirt meant!!!
I'd like to see if that particular t-shirt comes in larger, big-girl sizes
because I really would like to buy one!!!
(^_^)
(By the way....I have NO IDEA what Koji's t-shirt says. Obviously,
it was a present from Grandma!!)
***************

Virtual cakes are my specialty. Let me know if you need help making one. :-)

Koji is an inventive guy!

Cheesecake ice cream on a stick? You are blogging from Heaven above, aren't you?

P.S. That "XO" there at the end? That was your virtual hug and kiss. I imagined you wearing the shirt. I have seriously good imagination skillz, as you know.

Carrot cake is delicious no matter how it is decorated! And cheesecake ice cream bars sound incredible... yummm.. now I feel like I need to bake.

XO from me, too. I love the bathtub stunt.

I bought Dave a Godiva chocolate cheesecake slice from the Cheesecake Factory, but he's sick so I'll guess I'll have to eat it. So sad...

And that tshirt is adorable :-)

I'm virtually going to lick the bowl you blended that carrot cake in and the frosting too. XO

clean bathroom. who's scrubs it for you...

I have got to have one of those ice cream bars!!!

Oh, and some carrot cake to go with it! LOL

I see you feel the same way about cream cheese.

Where can I get some of that frozen yumminess??

Cream cheese is one of my favorite food groups.

All I need is a straw to snorkel? I've been letting the equipment get in the way!

(That, and the fact that I have no desire to snorkel. But maybe I would like it in the tub.)