(Not so) Wordless Wednesday

If you were to ask anyone not living in Japan about Japanese food, I'm sure that sushi, rice, raw fish, and more sushi would probably be what they think "we" eat all the time.

What people don't know, is that Japan is home to some of the most delicious breads. No...I'm not talking about the wheats, ryes, and pumpernickels....I'm talking about breads with yummy stuff baked into them, like chunks of cheese with ham and onions, or (hand in the air, swear to God!) about 1/4 a block of cream cheese with a sourdough-like bread around it....or...seriously....I could go on and on and on....
Talk to anyone who has lived in Japan for any amount of time and just the mention of bread with chocolate baked in it will bring a look of total "haaaaaaa" on their face!!

Now...ask any Japanese person what their favorite bread is and many of them will say "meron pan".....that would be melon bread to you and me. The word pan is bread...as it is in Portuguese (a lot of Japanese words are borrowed!), and melon, not because it tastes like melon, but because it looks like a melon.
And so...I give you.....MELON PAN......... 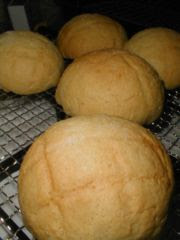 So...what is melon pan? (you may or may not be asking yourselves!)
Well...simply put....it is a sweet bread baked with a thin layer of cookie dough wrapped around it and scored so it resembles a melon. More simply put....it's heaven. And if you happen to get one right out of the oven....then...it's "Oh my God, delicious!"
You can buy them anywhere...convenience stores, big bakeries, small bakeries, but our favorite place to buy them is from the "traveling bakery"....it's a van with an oven inside and wherever they go, they make "fresh bread". There are no words to describe the smell around that van....just close your eyes and imagine. Usually, if you see one of these vans, there will be a line of people...waiting...because, the wait is worth it.
(Plus...I hate waiting in lines, but if some warm melon pan is what I get at the end of the line, then color my butt standing there with the rest of the people!!) 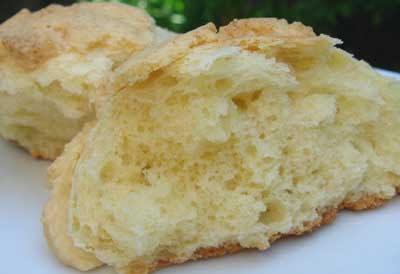 Doesn't that look just yummy? So soft and sweet on the inside with a crunchy topping!! (I know there is one more left in the kitchen and I am about to talk myself into heating it up!! mmmmm...a late night snack.....)

So....speaking of bread....I thought I would share with you a few pictures of some breads that my friend made for her daughter's birthday..... 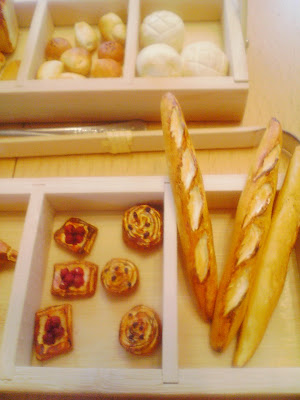 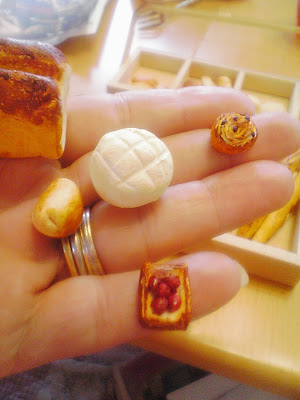 Yes...that's my hand holding the breads!!!

My friend, Tomoko's daughter was turning 3 and she was getting a kitchen set for her birthday. She loves to play "house" and Tomoko decided to make her some bread to go in the kitchen!!!

She used papier mache'.....and painted every single one!!! Click on the picture above again and look at the detail...especially on the cinnamon rolls (with raisins!!!) and the raspberry tarts!!! Amazing!!! 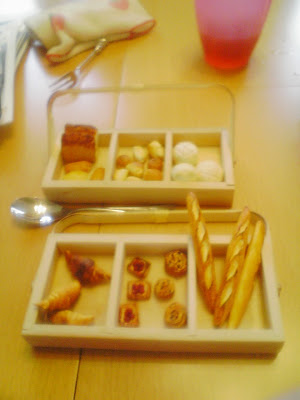 The time and effort it took to make those just amazes me. I don't think I would have been able to hang in there to the end. But...then again...

If you could have seen the look on 3-year-old Aiko's face as she was playing with all the fun stuff in her kitchen...set up in the big kitchen so she was right beside Mommy... yeah....I probably could have done it, too.

(But mine would NOT have turned out as perfect little replicas...mine would have been.....interesting looking, I'm sure!!)

Oh my goodness! Those little breads are amazing. What a talent your friend has. The Meron Pan sounds heavenly. Japan has long been on my list of places to visit, someday, but since getting to know you it's moving closer to the top of the list every day.

I told my friend that if and when I ever got my shop going, her stuff would be the first things I would want to sell!!

And...come on over!!! Japan is a wonderful place...such nice and lovely people living here too! :-D

Those are beautiful. She definitely needs to start an internet-based business. We can spread the news blogger style. I know lots of people that would spend serious coin on that stuff.

You have found my weak spot. Who needs candy when there is all this good bread in the world. These pictures are sinful.

um..bread wrapped in cookie? i will be arriving sometime around 7pm tomorrow.

I have found a couple recipes for melon pan...will try one out soon and report...
And...I just ate the last one from the other day....yes, it was sinful. Sorry, Katy..they're all gone...but I can get more!! :-D

Wow. I love the little breads. They are endearing. I would spend serious dough on those little loaves of love. Pun intended; alliteration admittedly awful. Sorry. It's late here in the States.

Those breads looked so yummy.I would put on way too much weight enjoying all of it.Those little intricate breads your friend made for her daughter are adorable.Hope her daughter enjoys them while playing with her kitchen set.

That is amazing. What a mom! My poor kids will never know what it would be like to have a creative mom like that.

Oh bread. Bready breadness. I noticed when we were in Singapore & Malaysia, savory stuffed bread things were everywhere...MMMMmmmm.

I believe I was lucky to sweat off any poundage that was trying to lodge itself on me.