just easing back into a regular scheduled program.....

happy friday, everyone.
and yeah...i know...it's tuesday night
(here in japan, anyway...i don't know what day it is where you are)...
just work with me folks...and look back up to the title of this particular post.  did you see it?
"easing back into a regular schedule"
some of us just ease back into things a little slower than others.
whatever.
~~sigh~~ 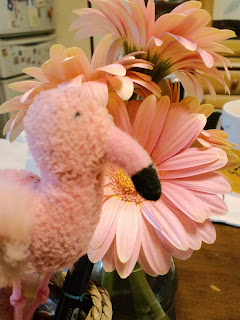 i found these gerber daisies at my favorite little flower shop a couple of weeks ago (now almost three weeks ago, but...carry on) and they are still looking pretty good (okay...so they're dead and tossed in the trash now and only a mere memory...again, carry on).  the color is almost an antique pink.  when issei saw this picture he thought it looked kind of like a sheep....a pink sheep....an antique-y looking pink sheep.
that's okay.  we know what it is.
(^-^)
**************
the snow has melted....but in our garden there is still a bit that is really hanging in...errr....laying there. 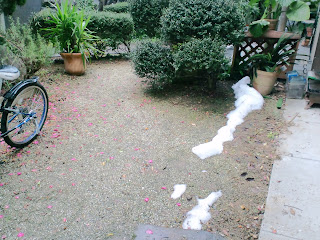 this part of the garden doesn't seem to get as much winter sunshine....koji thought that tomorrow (the other day!), if it was still there, he would see if he could make some more snowmen....something tells me that they might just possibly end up being snowballs....color me silly, i know, but.....why on earth would i think that? 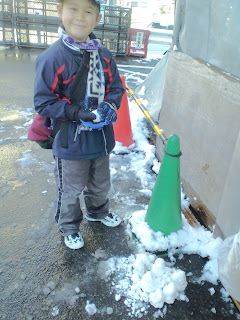 *****
resolution:   a promise to yourself that you'll make a serious effort to do something
many people, during the new year, make resolutions for the coming year.
and many of those same people, by the end of the first week (if they've lasted that long) are done.
i'm much like those many other people...i come up with things that i want to accomplish in the coming year.. but, my motivation doesn't last very long.
it's the pressure.
i fold like a paper umbrella in the rain.
(yeah, maybe i just made that up....you can use it if you want.)
it's the whole "i'm going to do blah blah blah." or the
"i will yadda yadda yadda." that gets me.
so...this year....i'm making anti-resolutions (for want of a much better word)..
things that i'm NOT going to do.
for example.....
*i'm not going to have more than 2 coffees (and i use that word coffee very loosely, as i tend to order drinks that are frothy and have whipped cream on the top) a week from my favorite mermaid logo-ed coffee house.
*i do not have to eat every little snack and sweet that my students or neighbors give me as souvenirs from some place that they have visited.  the men in my family love that stuff,too...i'm not going to keep all that goodness for just myself...i'm going to share the sweet, tasty love.
*i'm not going to buy a tea and something else at the convenience store. (and by "something else" i mean something to eat).  i'm perfectly fine with just a tea.  really. i am.
*i'm also not going to beat myself up if i happen to slip and have a third (or fourth) coffee that week...or eat a delicious snack from Tokyo...or even grab a small can of chips to go with my green tea.
it's done.
move on, scarlett.
*i'm not going to worry or angst or lose sleep anymore over people who i thought were my friends, but who said or did something that proved otherwise.
i have so many wonderful friends, why do i let, for example (i have a couple more, but will share only one), that one asshole (sorry, mom) who had been my friend for almost 35 years, to get away with dropping me and my friendship because, as he said, i was "being too cynical and negative".

oh, just for the record....if you are my friend and you happen to have a cynical or negative day, i will not ignore you...or demean your feelings.
i will not be that friend.

*i am not going to let all the little projects i have started sit for another year...unfinished.
i will not put off these things any longer.
also i will not think that i'm not good enough to share these things and even though i'm not
martha freakin' stewart.....i know how to get in touch with her.

oh...my friends, i have more...some i don't even know about yet...but....it's late and i'll share just one more.....one of most important of my anti-resolutions:

*i do not want to stay up too late at night..especially on a school night..when it's gets to be one o'clock in the morning and in five hours i have to get up, it's time to shut things down.
we are not really fond 'tired debbie'....'rested and happy debbie' is so much better to have around.

that said, i bid you all adieu...
to you
and you
and  especially you.

My only resolution is "I WILL put my Christmas decorations away before March."

every morning during the week I get a medium coffee and an egg & cheese wrap from Dunkin's for my breakfast...and I'm not giving it up!

I like the resolution about not beating yourself up for the third coffee or the bag of chips.

I'm having a little trouble picturing you as cynical and negative.

Your boys are so very cute! I miss little guys.

Also, those gerber daisies are the most beautiful pink--almost like the inside of seashells.

Hope you and yours are great! Happy New Year.

I usually avoid resolutions for the same reason but this year I decided to go for it. To get back into the gym (yawn). Our newly improved, millions of dollars spent to renovate, gym. I've been meaning to do so ever since they opened their shiny new doors (September) and decided I will not put it off another month. So far so good. Yay me!

p.s. I cannot believe for a moment you'd be cynical and negative. And I see Jenn agrees with me.