*The first of 3 days (maybe) of re-posting the information that was sucked into the black hole of nothingness by Blogger.* 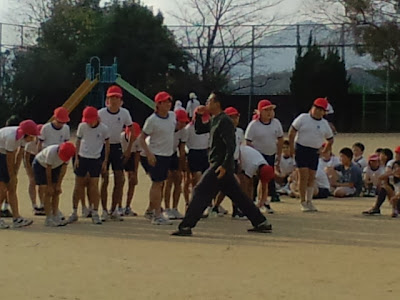 Issei, second from the right...getting ready to run, baby!
...and the original picture.... 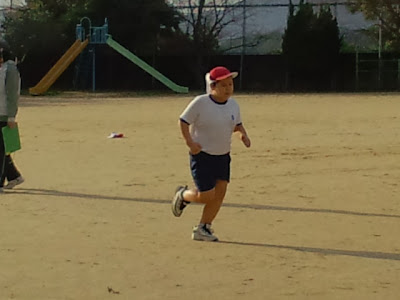 The story:
On Friday, Issei's class had their mini-mini-marathon. While Koji and the rest of the first and second graders ran 600 meters, the fifth and sixth graders ran 1,600 meters.
Issei was not too happy about this on Friday morning when he woke up.

While Issei will play sports.....he can pretty much take or leave them...usually leaving them for drawing pictures or playing on his Nintendo DS or playing a game that is popular here (again, for about the 3rd time in 15 years!) that resembles very fancy metal tops that you fight each other with...Bei Blades. (I'll post on them later.....strange phenom among young boys here in Japan.)

Years later, when he is accepting some manga-writing award or Pulitzer Prize, I'll retell this story and add that this was one of those days I will never forget. I will remember the intense feeling of pride that I got from that young man....I might even get choked up.

Oh, no....he didn't win. He really didn't even come close. He was more in that group that was bringing up the rear. But....he. never. gave. up.
While a couple of other boys slowed down to a walking pace, Issei kept going....and every time he passed by the group of moms that had taken the afternoon off to witness this annual event, he smiled. He smiled really big. He even gave me a bit of a finger-wave one time as he was passing by. But, he kept on jogging....slow and steady...

By the time he got to the last lap, the fifth graders and sixth grade girls who had finished running their races earlier and the sixth grade boys who were done were all cheering for the 4 or 5 boys left running....it was so refreshing to see those kids shouting encouraging words as the boys went by. (One mom and I were laughing because we both had the theme music to Chariots of Fire in our heads!!)

The last 100 meters....something happened. Something wonderful.
Something that made everyone watching the race just a little surprised.
Coming around the corner, Issei reached deep down and found a burst of energy that makes me smile even today, when I think about it.
He came around that last corner just kickin' it!
Honestly....I have never seen that boy run so fast in all his 11 1/2 years!!
It was amazing.
Oh. And the smile on his face as he crossed the finish line?
Priceless.
Even the mom standing next to me had tears in her eyes.

I do believe that this is the way that Issei is going to be....slow and steady...not really making very much of a commotion...and then....he's going to surprise the crap out of everyone.
Me?
Nah. I won't be surprised.
I will have been waiting for it.

That's fantastic! Please tell Issei that his Auntie Sara only hopes she can perform half as admirably in her own "mini marathon" in January :)

What a great way to look at it--slow and steady, with a big surprise at the end. Plus, we all know what happens with slow and steady--it wins the race.

awesome post Debbie! What a great story and what great boys you have!!!

Oh, you brought tears to my eyes!! Way to go Issei!!

Awesome! He has stamina and determination--two things that will take him very far in life. Congraulations, mom.

Very sweet story! I knew you had it in you, Issei! You can do ANYTHING!

That is soooo cool, I am so proud of him!

The Girl Next Door said...

Kids just are so amazing and never cease to bring us great joy and surprises. rock on momma!